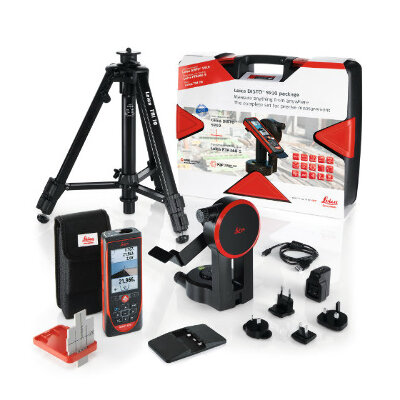 The S910 is the first LDM that captures multiple, accurate measurements in three dimensions from a single location, radically improving the efficiency of common measuring tasks.
Smart Base -- a biaxial pivot integrated with the circuit board -- is the key hardware innovation. Combined with a more powerful laser, a 360° tilt sensor, and new software --SmartBase enables the S910 to measure the distances and angles between multiple points.
SmartBase facilitates three new remote measurement functions:
Point to Point (P2P): Measure the tie distance between two points, even if you are hundreds of feet from your target. Shoot Point 1 then Point 2 and the S910 displays the distance between them. Widths, heights, diagonals, gaps, it doesn't matter: Just measure the start and end point and the distance is displayed.
Smart Area: Shoot the corners of any polygon to determine the area of walls, floors, even complex roof shapes.
Smart Angle: Shoot three points to measure any angle (including outside angles, which is a first).

In the vast majority of cases you will want a tripod to use these functions. In addition to an S910, the Pro Pack includes a TRI20 Tripod and a FTA 360-S adapter.

Even with a tripod and outdoor pointfinder camera, placing your laser point exactly where you want it can be challenging, especially at longer distances. The FTA 360-S is a micro-adjustable tripod adaptor. Point and shoot to get close, then tweak the knobs ever so slightly to adjust your spot by millimeters.

Capture and Export Measurement Data
The S910 connects to compatible mobile apps with Bluetooth and exports DXF files over WiFi.